Eat, Drink and Be Vegan shows how delicious a Vegan life can be (like having a Cashew-Chocolate Crumb Ice Cream Pie – with delicious pictures). Many varied dishes are created before your eyes with step-by-step directions accompanied by pictures. Vegan varieties (improvements) to “normal” dishes like pizza or mac and cheese are also featured.

Eat, Drink and Be Vegan is authored by Dreena Burton, an at-home mom of two children. She is the bestselling author of three vegan cookbooks: “Eat, Drink and Be Vegan”, “Vive le Vegan!” and “The Everyday Vegan”. She lives in British Columbia, Canada, and runs several blogs. She loves to cook. 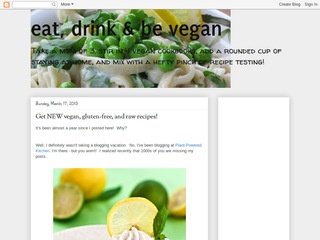