Dispatches from the Culture Wars

Political activist, writer, speaker-for-a-fee and co-founder of The Panda’s Thumb evolution vs. creationism website, Ed Brayton doesn’t boast any real scientific credentials on his Seed Science Blog. He styles himself as a “defender of science.” If you believe science is politics perhaps Seed can be forgiven for giving him a stall in their SciBlog stable. Or perhaps Seed should consider hosting a stable of political bloggers where blogs like this would better fit.

Brayton is a born brawler with some strong opinions he’s not shy of posting in public. If science is more about emulating right-wing talk radio’s gung-ho culture warriors than explaining or promoting science to the public, Dispatches from the Culture Wars is among the best of the SciBlog breed. What it’s mostly not about is science. 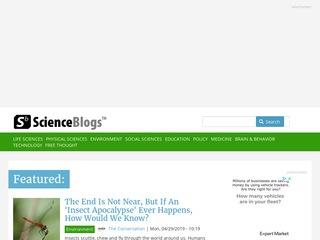